You probably already know Southeast Missouri State University is known for its commitment to students. But you may not know, we’re also known for having some VIPs right here on campus. 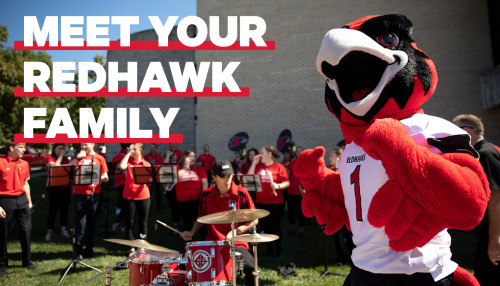 These celebrities are known by the entire SEMO community and may be people that you might want to get to know:

Jay Contrino is the go-to guy if you aren’t sure what you want to major in. He’s an academic advisor, and he’ll help guide you through picking your classes and helping you find the right major. A music man, you might even see him playing drums at University events or River Campus shows.

Dana Daniel is a 2020 Outstanding Academic Advisor Award recipient. The student who nominated Dana for the award said she’s hard working, caring, and determined to provide the best guidance through their academic journey at Southeast. And, that’s just want you want in an advisor.

Michele Irby is the director of Campus Life and Event Services, so if there’s something happening on campus, she’ll know about it. She has a wealth of knowledge about anything and everything Southeast. And, she’s always got a friendly smile!

Dr. Slavica Kodish is a 2020 Outstanding Academic Advisor Award recipient. She’s also an associate professor of communication studies and director of internships for Southeast’s Department of Communication Studies and Modern Languages. Students say Dr. Kodish is a good source of encouragement and support in both academic and personal success.

Known to many as “Coach Tuke,” Tom Matukewicz is the head football coach. He’s known for giving inspirational words on and off the field. You might also see his truck around town. When you see it, you’ll know who’s behind the wheel!

Dr. Jim McGill is a professor of chemistry and the director of the Jane Stephens Honors Program. He’s known around campus for always going above and beyond to help students. He’s also an academic advisor.

Rekha Patterson is the head women’s basketball coach here at SEMO. And, we don’t want to brag too much, but she’s really good at her job. In fact, she just led the team to an OVC Championship and was named the Ohio Valley Conference Coach of the Year.

Dr. Julie Ray is the chair for the Department of Elementary, Early and Special Education. Dr. Ray has been at Southeast since 2002, and she’s developed quite the reputation for her dedication to students, past and present.

Rowdy is our super cool mascot. You can find him cheering for Redhawk victories, taking part in community service activities, and meeting new friends. He loves high fives, so be sure to give him one when you see him!

Dr. Bruce Skinner is the associate vice president for Student Life, but he prefers the titles of imperial lord or supreme commander. He oversees Greek Life and Residence Life. He’s also known for his dapper style: he’s almost always wearing a bow tie.

Dr. Shonta Smith is a professor in elementary education and the Holmes Honors Program coordinator. Not only is she a fantastic professor, but she’s also known for motivational videos that she posts weekly on Facebook. She’s event written a book about meditations for the soul.

Alicia Ticer is the director of Marketing and Student Engagement for Chartwells, the food service provider at SEMO. If you have questions or concerns about any of the dining facilities on campus, Alicia is always quick to help.

We happen to think we have the coolest University president. Not only is Dr. Carlos Vargas a great leader, but he’s also a great athlete! He’s been known to play a game of soccer with students. He can also be found at most sporting events and dancing along with the band.

In addition to being the first lady of SEMO, Pam Vargas is the director of the Office of Research and Sponsored Programs. You can find her cheering on all the Redhawks at many campus and athletic events and generally doing all she can to support all our students.