What's a Show Me Day?

Show Me Days have a rich history at SEMO dating back to some of the earliest days of our university. 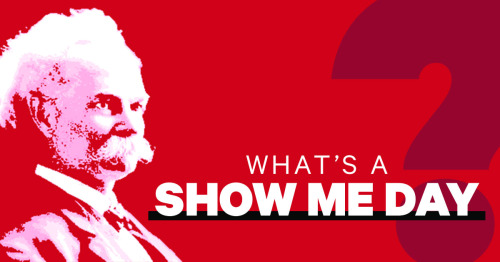 Way back when Southeast was actually called the Third District Normal School, a man named Willard Duncan Vandiver took a position as the chair of science in 1889. After many years, he was appointed our president and served from 1893 to 1897. In true Southeast spirit, he didn’t limit himself to just one of his passions, though.  He was a delegate to the Democratic State conventions for several years, and was elected, and re-elected three times, as a Democrat to the Fifty-fifth United States Congress. He also filled a variety of other important roles, but you’re not here to read his resume, so we’ll skip to the juicy part of our tale.

In an 1899 speech he gave while serving as one of Missouri’s U.S. Congressmen and on the U.S. House Committee on Naval Affairs, he’s quoted as saying “I come from a state that raises corn and cotton, cockleburs and Democrats, and frothy eloquence neither convinces nor satisfies me. I’m from Missouri, and you have got to show me.” In other words, I don’t believe it ‘til I see it.

Over a hundred years later, Missourians are driving around with “Show Me State” on their license plates, and we’re paying homage to our former president by inviting future students to see our campus for themselves, because we know you’re not satisfied by frothy eloquence, either.

Register to attend an upcoming Show Me Day, and we’ll give you a taste of what life at Southeast is like. You’ll tour campus, learn about scholarships, talk to current students, have lunch like a real Redhawk, meet your future faculty members, and more.