Transportation Talk: How Do I Get There?

You’re here and you need to be there. We can help. There are plenty of ways to get around campus, Cape Girardeau, and beyond, even if you don’t have your own vehicle. Here are some suggestions: 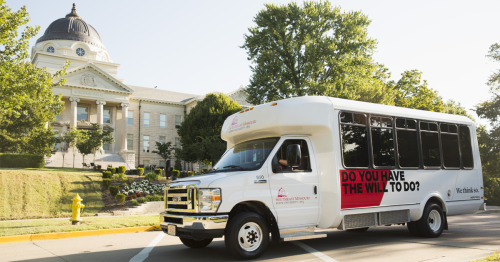 1) The campus transit system: There are three shuttle routes dedicated to campus. One of the routes includes stops at the River Campus.

2) WINGS Off-Campus Shuttle: The When In Need Go Shuttle operates Friday evening through Sunday evening. It stops at several residence halls on campus, as well as a few apartment complexes. You can take it to locations in Cape Girardeau, including Target, Walmart, and West Park Mall.

3) Cape Girardeau County Transit: There are two options with Cape Girardeau County Transit (CTA): you can use their fixed-route service or their demand-response vehicles. The fixed-route consists of two bus routes within the City of Cape that makes stops at specific locations, including grocery stores and shopping areas. You can also use the demand-response vehicles which operate as a taxi service.

4) carGO: This local ride service was started by Southeast Missouri State alumni. You can use their app to request a ride or call in.

There are also plenty of options if you’re going a little further:

1) Cape Girardeau Regional Airport: You can board a flight in Cape Girardeau which will get you to Chicago, Illinois. From there, the possibilities are endless.

2) BART Shuttle: If you need to get to the airport in St. Louis, BART Shuttle is a great option. It’s a van transport service to and from the St. Louis Airport.

3) Amtrak: There are several Amtrak stations within driving distance of Cape Girardeau, including Poplar Bluff and St. Louis, Missouri.

And, don’t be afraid to ask a friend for a ride! Pro tip: if you have a friend that gives you lots of rides, it might be nice to offer them a little gas money from time to time.